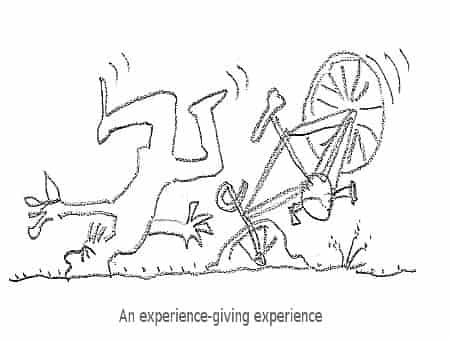 I promised a bit of grammar, so let’s start with a couple of completely different items that have nothing at all to do with each other: uncountableness and commas.

This is something that shouldn’t be difficult, and I don’t think it is. But misuse of uncountable nouns is common among non-native English speakers everywhere, not just Serbians.

Training, experience and investment are in most cases uncountable quantities like mud, blood or slime. To count them, they need a unit of measurement, like a pint of blood or a spadeful of mud. So you can’t deliver a ‘training’, but a training course or a training session, or just a lesson. But we can offer a range of training on a variety of subjects.

Some nouns can be both countable and uncountable: ʻThat was my first love’ (one of a certain number) and ‘I finished the letter by sending lots of love’ (several bucketfuls).

Equally, I have a lot of experience in a range of subjects, though I did once have a bad experience when I fell off my bike (two distinct meanings of the word ‘experience’). After I’d done that twice, I’d had two such experiences, but now I have so much biking experience that I no longer suffer these bad experiences. More experience, fewer experiences.

ʻInvestmentʼ is often an uncountable noun, but becomes countable for specific cases, though I don’t recall anyone ever using the uncountable version as they should. ʻThe government regulates to attract foreign investment, but in spite of this only three investments have been made. The three refer to three specific cases of investment.

This is similar to the use of a countable noun to indicate a type or a packaging unit: ‘We drank lots of beer’ (uncountable liquid), but ‘We tasted eight beers but I preferred the IPA (types of beer)’ or ‘We drank at least seventeen beers between us (measures of beer)’.

Integration ‒ Use ‘European integration’ e.g. ‘Kancelarija za evropske integracije’ – ‘European Integration Office’, not ‘integrations’. This is not just a refusal of a daft term in Serbian. In English, ʻintegrationʼ is usually uncountable, it comes by the spadeful like mud, not in batches of 10 like eggs or anti-aircraft missiles. If we use the plural, we need to know which integrations are being referred to (e.g. types of integration, like ‘beers’ – perhaps something like: ‘civil integrations such as the EU variety during its enlargement as opposed to military ones like the Crimean sort’). Even then it would be awkward usage.

Oh, while we are on ‘usage’, by the way, ‘use’ is usually more correct in most places, except where it refers to the manner of using a term, a relatively unusual usage. In the same vein, ‘issue’ is often better than ‘isssuance’, an unpleasant word.

Commas in English are not governed by grammatical rules (like they are for example in Danish, where they have to separate clauses with an active verb whether the speaker would pause or not) but may be placed wherever they are useful to make a text more understandable or pleasant to read, often but not always at places where a speaker would pause. Imagine someone trying to read the text aloud in such a way that even the uninitiated can understand it.

In Serbian, commas tend to be peppered everywhere according to rules I do not pretend to understand. Do not keep them when translating into English but delete every last one of them, then insert others as appropriate.

Lists often leave out a comma for the last item that is joined by the word ‘and’, so: “He took a hammer, some nails, a pair of pliers and three planks” (by the way not ‘as well as’ three planks, even if the Serbian said ‘kao i’ – see aa previous article). But feel free to change this, if using this rule is not ideally understandable, e.g. :“She took a surfboard, a cool-box, a bucket and spade, and sun cream” (the last comma avoids your wondering what kind of cream ‘spade and sun cream’ might be). This is sometimes referred to as the serial or Oxford comma.

While we are at it, let’s mention the comma in the decimal point and thousands separator. English uses the full stop ‘.’ as a decimal point, and a comma ‘,’ as a thousands separator. This is the opposite of many other languages, but quite logical in line with their stopping value in a sentence of text. The Serbian ‘1.250.000,00 RSD’ is in English ‘RSD 1,250,000.00’. There are no exceptions to this, not ever. Everyone knows this, but you would be amazed at how often they get it wrong. In a document containing numbers, not getting this right can be a serious error.