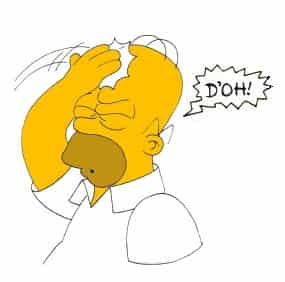 Translating into English is the first article in a series. A personal view from my experience editing (mostly Serbian) translations into English over a couple of decades

Over the years that we have been working with translation at Halifax, I have edited and proofread many texts on many subjects translated into English by good translators. At one point I began to be aware of a number of repeated problems that Serbian and other translators face when writing English. I made a list of these problems, then forgot about it. Recently, someone asked me to revive it, and I thought it may be useful to do that as a blog, so I can amplify a bit on some of the themes.

Some of the issues I’ll deal with are errors in simple grammatical rules taught in school, but oddly frequent among professionals until pointed out, when the reaction is “d’oh!”, as Homer Simpson nicely puts it.

Others include inappropriate style or an ingrained use of not quite suitable terms. The latter is so often repeated that it gives me the feeling that some influential teacher who has got it wrong is promoting the use of a bad phrase, but perhaps it is a peer network effect: “Vesna always uses that phrase and no-one has ever criticised her for it”; or “that’s how it’s always been done”. The latter is a common argument, presumably because it’s an effective one to shut up doubters, especially in public administrations. In some places it has even created a new ‘received’ version of English that can make native speakers bite their tongues aghast. For example, the name of a ministry was badly translated, and now it has to stay that embarrassing way because it’s been published on web sites and in papers. Admitting a mistake is every bureaucracy’s cardinal sin. “Move so slowly you can’t break anything”, to paraphrase a well-known motto.

I shall take a different tack and deal with my version of English in my own way. This means I may break things, and any objections or comments in return will be more than welcome. I don’t pretend to have the ultimate opinion and I’d like to learn something new too. My background is not in philology but in physics, computing, architecture, humanitarian and development aid then translation management, so I’m probably a bit disrespectful of some things that others would consider holy. Sorry for that.

But that’s the beauty of language, at least the English one: nothing is in principle right or wrong, there is no Académie anglaise that sets the rules. These are less like regulations, more like empirical observations, laws of nature that appear to tread certain paths, some more elegant than others, and they change all the time. For my sake you can use the language however you like, as long as you are aware of what you are doing and how it will be understood.

These notes are an attempt to help non-native English translators in a practical, commercial context, but others are welcome to weigh in too. I hope it is useful.